A poor farmer in Odisha was forced to carry his wife’s dead body on his back for miles in the absence of an ambulance in 2016. A similar incident occurred in Uttar Pradesh in 2017. Similarly, 2016 saw the outbreak of chikungunya in Delhi and in 2017 dengue and chikungunya infection broke out in Tamil Nadu and Kerala, followed by the death of approximately 77 children due to encephalitis in Gorakhpur district of Uttar Pradesh in August 2017 [1]. Numerous studies have found that the Indian healthcare system is plagued by inadequate infrastructure, lack of skilled human resources, inadequate drug and medical supply, lack of preparedness, etc. What is more alarming is that the government is gradually withdrawing from providing health services and encouraging the private sector to fill its role. Increasing cost of medication, high out-of- pocket expenditure, and corruption in the health system have adversely affected public health. There were only announcements of schemes before the elections, one after the other, and next one bigger than the previous one, with good names and big promises. However, there is only privatization and nothing on ground for the poor, but profits for the corporate.

Overview of public health in India

According to the Global Burden of Disease study, published in The Lancet, India ranked 154 out of 195 countries regarding healthcare access, lagging behind countries like Bangladesh, Nepal, Ghana and Liberia. India’s share in the global burden of diseases is significant (20%). Following figures show the grim picture of public health in India [2].

India contributes to 15% of the global maternal deaths. Maternal Mortality Rate (MMR) for India is 174 for every 100,000 live births, whereas, neighboring countries like Thailand, Sri Lanka, and China have MMRs of 20, 30, and 27, respectively, in 2015. Similarly, our Infant Mortality Rate (IMR) is 38 per 1000 live births, much behind our neighboring countries such as Sri Lanka (8), Nepal (29), Bangladesh (31), and Thailand (11). Around 43% of Indian children are underweight (for China and Brazil the figures are 4% and 2% respectively). As per the National Family Health Survey (NFHS‑4), only 62% of our children are fully immunized. India is the global rank 1 for tuberculosis (TB). We also have the rapidly rising burden of non-communicable diseases. There is also a mental health emergency – India accounted for 37% of global suicide deaths among women and 24% among men. Air pollution is also on the rise, with significant morbidity and mortality.

Now, let’s have a look at the condition of health infrastructure in India. Hospital bed density in India has stagnated at 0.9 per 1000 population since 2005 and falls significantly short of World Health Organization (WHO) guidelines of 3.5 per 1000 population. India is currently having roughly one doctor for every 1,800 people. WHO guidelines suggest 1 doctor for every 600 people. There is a resource gap of about 1.4 mn doctors and 2.8 mn nurses. As per the Rural Health Survey 2016, India is facing a shortage of 84% surgeons, 77% gynecologists and obstetricians, 83% physicians and 80% pediatricians at the Community Health Centre (CHC) level. Children born in the Scheduled Tribes (ST) families are at 19% higher risk of dying in the neonatal period (and 45% in post-neonatal period) than the other social classes. Moreover, a WHO report found that only one in five doctors in rural India are qualified to practice medicine.

The expenses for healthcare are also increasing day by day. The average medical expenditure per hospitalization increased by around 176% for urban patients and 160% for rural patients during 2004-2014. In India, out-of-pocket (OOP) expenditure, which is the payments made directly by individuals at the point of service, is typically financed by household revenues (71%). Only nine countries (out of 192) have a higher OOP spending as a proportion of total healthcare expenditure. Due to high OOP health expenditure, about 7% population is pushed below poverty threshold every year.

The Bharatiya Janata Party (BJP), in their election manifesto, made several promises for healthcare [3]. They committed to ensure that the OOP expenditure on health is reduced. The BJP, in this context, emphasizes on the Ayushman Bharat health insurance and wellness centre scheme. They promised to set up one medical college in every district, and also said to double the number of doctors and increased the number of MBBS seats and post graduate medical seats. They emphasized on the National Nutrition Mission and ensured ‘full immunization coverage for all the children and pregnant women’ by 2022. It promised for making drugs, diagnostics and medical devices more affordable (e.g. promoting the Jan Aushadhi scheme for generic medicines).

Performance of the Government

Now let’s check the performance of the present government with respect to its kind of promises for healthcare [4]. On the basis of Universal Health Coverage (UHC) Index of the World Bank, India ranks 143 among 190 countries in terms of per capita expenditure on health. It was estimated that the public expenditure in health must increase to at least 2.5% of GDP by the end of 2017 and to 3% of GDP by 2022 to achieve UHC. However, the public health expenditure has remained constant at approximately 1.3% of the GDP and the trend has not changed even in the last union budget. If we include private sector, the total health expenditure is about 4.0% of GDP, i.e., about one-third of health expenditure (33%) is contributed by the public sector. As per the World Health Statistics, this contribution is low as compared to developed countries and also other developing countries like Brazil (46%), China (56%), and Indonesia (39%) (Figure 1) [4]. 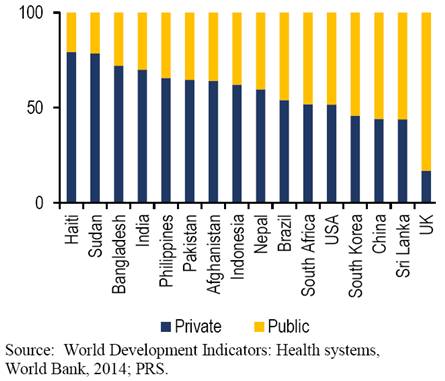 Figure 1: Public and private split in the total health expenditure for various countries (in %) 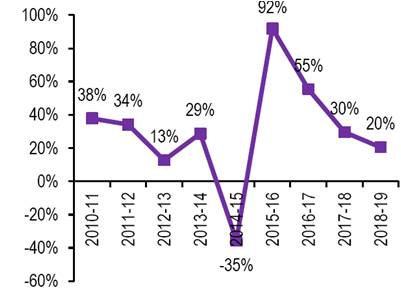 Health institutions in India are mainly three types: primary care (primary health centres), secondary care (district hospitals), and tertiary care institutions (specialized hospitals like AIIMS). The HLEG (2011) recommended that the focus of healthcare provision should be towards providing primary health care. Primary health infrastructure has a three tier system – Sub-Centres (SCs), Primary Health Centres (PHCs), and Community Health Centres (CHCs). A similar set-up is there in urban areas too. As of 2016, there is a shortage of 20% in SCs, 22% in PHCs, and 30% in CHCs. Moreover, the existing centres are poorly equipped and have inadequate infrastructure. There has been a steady increase in the shortfall of doctors, specialists and surgeons. Apart from these, expectant mothers in rural areas often lack nutrition which affects their pregnancy.

A new insurance scheme, the National Health Protection Scheme (Ayushman Bharat) was proposed in the Union Budget 2018-19. This will provide coverage to 10 crore poor and vulnerable families of up to Rs 5,00,000 per family per year for secondary and tertiary care hospitalization, in both government and private hospitals. It may be noted that 86% of rural population and 82% of urban population are still not covered under any scheme of health expenditure support. For government sponsored health insurance, the Net Incurred Claims Ratio (ICR) increased from 87% during 2012-13 to 122% in 2016- 17 (higher ICR means more claims have been paid in comparison to the premiums collected leading to losses), whereas, there has been a gradual decline in the Net ICR of private insurance providers. As per the National Sample Survey (NSS) 2015, most hospitalisation cases were seen in private hospitals (68% in urban and 58% in rural areas). Further, the cost of treatment (excluding childbirth) was four times higher in private hospitals as compared to that in public hospitals. Clearly, the private hospitals are gaining day by day. Moreover, the Standing Committee on Health and Family Welfare observed that the proposal to transform 1,50,000 Health Sub-Centres into Health and Wellness Centres has not been implemented and has no ‘solid roadmap’. The government decided to open up 3,000 Jan Aushadhi stores by 2017, though, only 437 such stores are operational. Moreover, the existing Rashtriya Swasthya Bima Yojana (RSBY) even saw an average reduction in fund post-2013 (except 2018-19 budget) (Figure 2) [4].

In 2018-19, the pool of funds for non-communicable diseases has increased by 5%, on the other hand, for communicable diseases and immunization, it decreased by 27% and 30% respectively. Non-communicable diseases are closely associated to lifestyle changes; whereas, the drastic decrease in the allocation of fund for communicable diseases are more likely to affect the poor than the rich. Recently, the ministry has also allowed for-profit companies like Reliance, Wipro, and Fortis, to set up medical colleges. They are likely to charge a high fee from the students, and the students graduating will be less likely to serve in the rural areas as their focus would be to recover the money spent on their education. Moreover, the promotion of AYUSH and a bridge course to allow non-MBBS doctors to practice modern medicine will only degrade the quality of healthcare, especially for the poor.

The draft National Health Policy (NHP) 2015 proposed a National Health Rights Act as an essential component. But, while approving the NHP 2017, it was replaced by a vague ‘incremental insurance-based approach’ placing private actors in critical positions. Almost all the major institutions and authorities have emphasized the importance of the role of public sector spending on health care, whereas, NITI Aayog has been emphasizing the role of private sector for primary health care. Nearly 26% of the total health expenditure in the rural household is met by either borrowing money or selling an asset and the out-of-pocket expense on healthcare often drags the vulnerable population below the poverty line [1]. Privatization of healthcare in India will only ensure this.

[3] The Wire Staff (2019, April 9). On Health, BJP Manifesto Replugs Existing Schemes But Is Vague on Other Plans. Retrieved April 12, 2019, from The Wire: https://thewire.in/politics/bjp-manifesto-healthcare